What a week of sport we have ahead. It’s finals mania! The NHL, UEFA, and NBA are all hosting huge clashes between the leagues best-of-the best.

Last week proved that anything can happen… Lyon, the major underdogs knocked out Manchester City in the UEFA Quarter finals. In fact, one lucky punter backed the +1100 outsiders. A huge #wagerrmoment for them.

We all know that Wagerr has the sharpest odds across MOST matchups. But we are changing that MOST to ALL in the NBA finals. We are boosting the odds for every NBA Finals Game so you win MORE!

With 7 game matchups between all quarter finalists, across both conferences, that’s a lot of value to have.

Last week the betting volume reached over 230k USD, levels not seen since prior to covid-19 back in February. The impressive volume was matched with an impressive burn for the chain with almost 475k WGR being removed from the supply. See all the stats here

Of the eight first-round playoff matchups, not a single one strikes more intrigue than Lakers versus Blazers. Can the struggling Lakers — who went just 3-5 in the bubble — hold off the surging Blazers, who are coming off of four straight victories to get to this point?

This fight might be bigger than just Steven Adams flexing his muscle to get the Oklahoma City Thunder through a tough first-round NBA playoff series against the Houston Rockets, starting Wednesday.

This might just be the 27-year-old New Zealander going to battle for the centre position in basketball, underlining the value of an old-school big who does his work in the paint at a time when some NBA teams are being lured down a pathway of pace, space and three-point shooting.

The Los Angeles Clippers, led by Kawhi Leonard and Paul George, are built to win a title. The Dallas Mavericks, led by Luka Doncic and Kristaps Porzingis, are built to score a ton of points.

Eels vs Storm
A few cracks have appeared in the Eels lately - a narrow win over Cronulla was followed by last week's upset loss to the Dragons - and they won't get a tougher test than the Storm. Melbourne cut the Roosters to shreds last week, silencing the doubters who said they can't win without superstars Cameron Smith and Cameron Munster. And that's why this week Melbourne Storm earn our bet of the week.

Champions League: Lyon v Bayern Munich
Can lightning strike three times? Lyon will believe it can despite Bayern destroying Barcelona. Having beaten Juventus and City they’ll think anything is possible and they’re enjoying their status as underdogs.

Chicago Blackhawks v Vegas Golden Knights
The Blackhawks are down 2-0 to the Golden Knights in the best-of-seven series, but they get to head “home” for the last change, so maybe there’s hope remaining for Chicago. 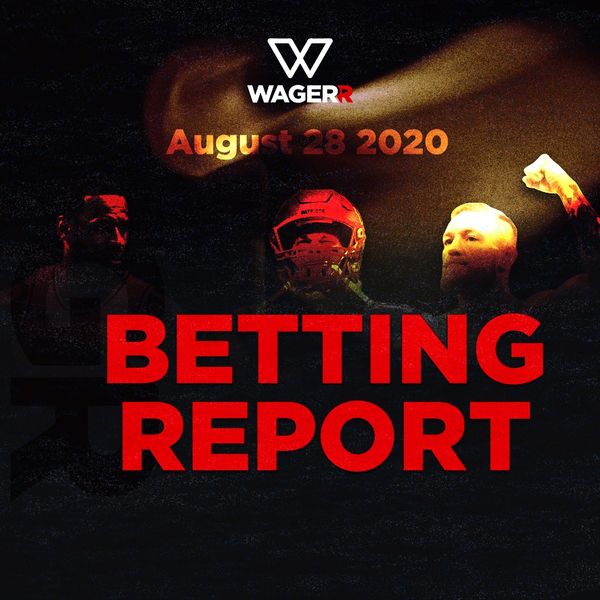 Another Week of Big Mints and Big Burns! This week saw one of the largest winners to date at just over 1 million WGR paid out in the Russia premier League match between Ural vs Krasnodar. 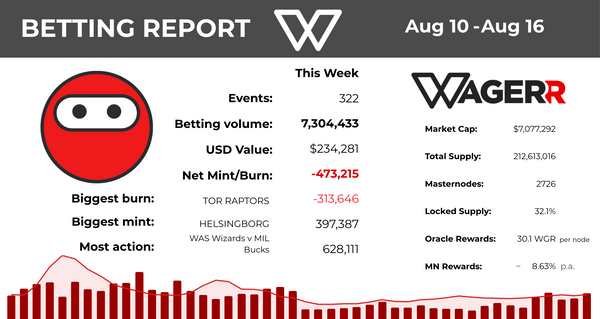 The betting volume reached over 23ok USD this week, levels not seen since prior to covid-19 back in February. The impressive volume was matched with an impressive burn for the chain with almost 475k WGR removed from the supply.