A huge week for sport and a huge week for Wagerr as we saw the largest betting volume post-COVID-19. The NBA Playoffs have been providing some upsets and amazing moments. The Clippers have forced a game 7 and the Lakers advance to the Western Conference Finals for the first time since 2010! The NFL also officially kicked off and we can’t wait to see what this does to the betting volume.

There was just shy of 6.5 million WGR bet, an increase of 18% from last week. The punters were too strong this week with a net mint of 664k WGR meaning that masternode holders were rewarded handsomely with 33 WGR each (~9.31% p.a.). See the full breakdown here

The Celtics are just too good a team. They should win this series. They no doubt will drop a game or two, but at these odds, it’s hard to pass up.

Denver has surprised the basketball fraternity by sending this series to game seven and the LA Clippers will need to step up to avoid the upset. Unders may be the play here, as scoring has started to fall off in the series. Clippers should win. Bring on the LA-LA series we’ve waited all season for.

Boston and Miami upset their higher-seeded opponents and now Jimmy Butler hopes to lead his team past a star-studded Celtics. Hard to pick, but Boston is an elite team on both sides of the ball, and personnel-wise matches up well with how Miami likes to operate on offense, Boston should win the series.

The New England Patriots are an unusual road underdog when they face the Seattle Seahawks. The new-look Patriots, led by QB Cam Newton, hosted and beat the Miami Dolphins during Week 1, while the Seahawks, powered by four QB Russell Wilson touchdown passes, easily handled the Atlanta Falcons on the road.

Keep and eye out on totals. Overss will likely be high but if not, we see a bit a high scoring affair.

Tampa Bay stumbled out the gate—losing 34-23 at the New Orleans Saints in Week 1—with Tom Brady’s two interceptions and abysmal 34.5 QBR. The Panthers dropped a back-and-forth game to the Las Vegas Raiders 34-30, despite 134 all-purpose yards and two TDs from newly minted RB Christian McCaffery.

They have answered every challenge in 2020 and head into Friday night's clash at Townsville needing one more win to clinch the minor premiership.
Penrith will put on a clinic, which means overs is looking likely, but the Cowboys will be pushing hard to even score a point.

After Storm’s Demolition of the Cowboys last week, and the fact that Tigers are purely playing for pride, expect a bloodbath.

This will be the first instalment of a quick two-game set between these teams this week. The Nationals are coming out of a series versus the Braves over the weekend. Washington won only one of those games. As for the Rays, they played the Red Sox in their last series. Tampa Bay split that set at two games apiece. The Rays should win in this one. Tampa Bay is simply a better baseball team.

Braves fans likely saw this series against the Orioles as an easy way to pick up a few wins late in the season. But Atlanta was blown out of the park yesterday! The Orioles will be looking for another victory as an underdog on Tuesday. Luckily, Baltimore won the first game of this series easily after scoring 14 runs so perhaps its offense will continue producing in this home game.

The newly crowned Premier League Champions Chelsea are expected to receive a guard of honour when they take to the pitch against top 4 hopefuls Liverpool on Sunday. Our betting tips suggest that it should be a close one, Chelsea will maintain their professionalism and take the points on Sunday.

Leeds United and Fulham, the two teams who returned to the Premier League, face each other at Elland Road in what is expected to be a very exciting game. The Whites produced a thrilling display in the season opener, but they eventually failed to spoil Liverpool’s party at Anfield.

The Cottagers, on the other hand, experienced all sorts of problems at the back in a 3-0 loss to Arsenal, and it is no wonder they are seen as No. 1 candidates to suffer relegation at the end of the season. Leeds United are more of a team than Fulham, and we predict that the hosts will prove their worth on the field.

The Stars will have the chance to eliminate the No. 1 Vegas Golden Knights when the two teams take the ice for Game 5. This Vegas offence seemed primed to breakthrough in Game 4, and it still might, but you have to give credit to this Dallas defense and Khudobin. The Stars are showing why they concluded the regular season with some of the best defensive stats in the league. The ‘under’ has now hit in seven straight games for Vegas...

After winning Game 4 of their Eastern Conference Final against the New York Islanders, the Tampa Bay Lightning (No. 2 seed) have taken a 3-1 series lead, finding themselves just one victory away from reaching the Stanley Cup Final. The Lightning have never lost a playoff series after leading it 3-1, triumphing on all previous eight occasions. They should get the job done.

The time for trash talk is over when Tyron Woodley & Colby Covington finally face off in the Octagon this Saturday Night. Woodley is on the first 2 fight losing streak of his career whilst Covington is back for his first fight since host 5 round epic against champion Kumaru Usman where he was finished late in the 5th. Expect Colby to be too much for the aging former champ in Tyron Woodley

Donald Cerrone V Niko Price
The legend Donald 'Cowboy' Cerrone is back in the ring to take on the unpredictable and dangerous Niko Price in Saturdays co-main event. Coming off 3 straight losses, Cowboy is the underdog whilst his opponent Price, a deserved favourite after impressive back to back finishes of Mickael Vick and the top 10 ranked Vincente Luque. Never count out a legend like Donald Cerrone but Niko Price is a good bet. 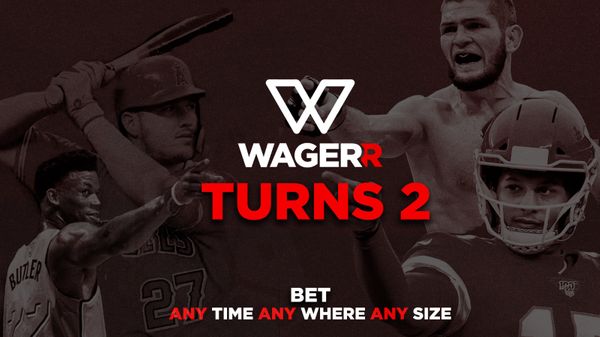 The Wagerr Betting platform is celebrating its second year of operation. A significant milestone for any crypto protocol but particularly for one in such a competitive industry like gambling. Learn whats in store next year.

A huge week of sport in the US saw more than 315k USD bet on Wagerr across 377 events. Despite the US sports being all the focus, J-League saw some of the biggest action over the week.